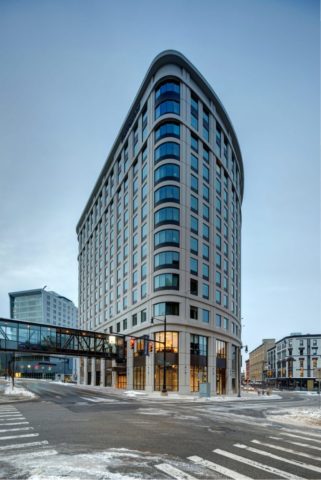 The property was acquired in 1995 by Roger Hinman, chief executive officer of The Hinman Company, along with the neighboring 77 Monroe Center (Former Michigan National Bank Building) and 30 Ionia Avenue Parking Ramp. The Hinman Company worked with the City of Grand Rapids and the Historic Preservation Commission to transform the previous 40-space triangular shaped surface parking lot into a 13-story mixed-use building at 10 Ionia Avenue NW in the Heartside Historic District. The iconic flatiron building is a modern and contemporary design version incorporating historic design principles.

Historically, the triangular lot, formed by Ionia, Fulton and Louis, was home to an 11-story brick-and-steel structure that was occupied by a variety of uses including the Rindge, Kalmbach, Logie & Company shoe factory as well as a hotel parking garage for the Morton House. After several years of sitting vacant, the building was demolished by a former owner in 1979.