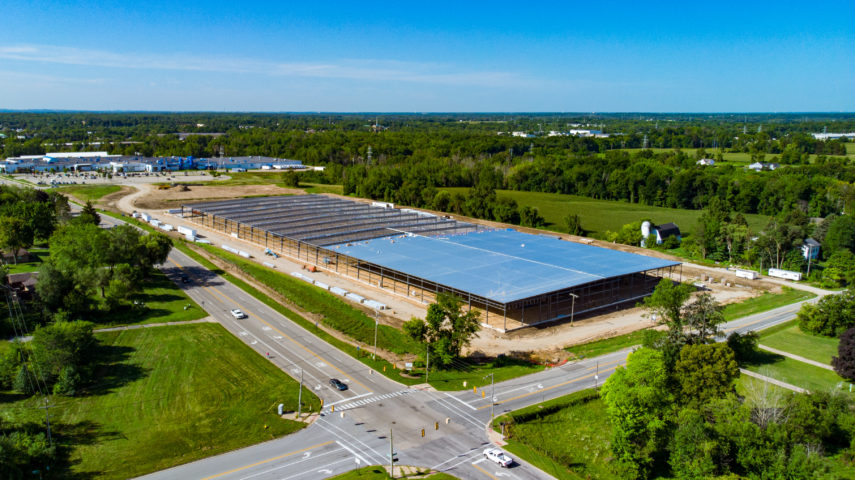 The thriving sector is also driven by the success of manufacturing companies during the pandemic, and local real estate experts predict the industrial market will continue on its current trend for the next several years.

“We’ve always been a strong industrial market, and since COVID, the pressures have increased on both fronts: manufacturing demand and distribution,” Kuiper said. “We are getting new pressure from last-mile and other product distributors that we need more products readily available to satisfy customers and people shopping online on platforms like Amazon.”

“It’s not only big box stores and companies. We’ve had smaller distribution companies that will deliver those finished products to the consumer. Some of the inventory is being taken up by third-party fulfillment or logistics companies doing that home delivery,” said Robert Horn, senior vice president of JLL’s West Michigan office.

With the high demand for industrial space, rent rates have been increasing for the few existing buildings on the market, said Stu Kingma, associate broker for NAI Wisinski of West Michigan.

Average rental rates throughout West Michigan for the second quarter of 2021 were at $4.76 per square foot triple net (factoring in property taxes, insurance and maintenance), which is an increase from the $4.28 rates in the first quarter of the year, according to NAI’s recent industrial market report.

“We’re at a point where a lot of our inventory is just gone,” Kingma said. “There is not a lot of product left, which is forcing the market to pivot to new construction. We have seen some speculative development in sizes and quantities we haven’t seen in some time. We’re also seeing demand for vacant land I haven’t seen in 28 years.”

Many deals are happening off-market, which is often the case when vacancy rates are hovering around 2 percent, Kingma said. The vacancy rate for the industrial market has fluctuated slightly but has been consistently low for the last several quarters. The industrial vacancy rate was most recently at 3.3 percent for the second quarter of 2021, according to NAI Wisinski’s market trend report for West Michigan.

The slight increase is likely because of the increase in speculative construction projects.

“We are seeing a pretty significant uptick of speculative space projects and continued growth in that space really all across West Michigan, not just in Grand Rapids,” said Wolverine Building Group Inc. President Curt Mulder. “Developers are moving forward with these projects knowing they have two to three tenants interested in the space. In some sense they are specified, but they go into it without having tenants locked in yet.”

Many local companies are also moving into larger locations or consolidating facilities throughout West Michigan.

“There is a large amount of capital available,” said Brent Case, vice president of business attraction at The Right Place Inc. “These companies have been sitting on their cash throughout the pandemic and not making any moves, and now they need to grow and be efficient.”

Meanwhile, disruptions in the construction materials supply chain — particularly the high price of steel — have altered project timelines, though companies are still pursuing projects with material costs up 5 to 10 percent, Mulder said.

“The cost of steel has gone up tremendously in the last 12 months, which has developers hedging their bets right now,” Mulder said. “Often that’s causing them to lock in and order the steel substantially sooner than they usually would in the development process.”

Another major hurdle is unusually long lead times. Prior to the pandemic, steel could be ordered for a project and delivered on site in 12 weeks, which has now nearly doubled to 20 to 24 weeks, Mulder said.

“Developers obviously don’t like prices going up, but they understand because they are going through the same challenges themselves,” Mulder said. “Just like in their core business, they are having to purchase raw materials ahead of time, so they understand the process.”

General contractors are communicating substantially more with customers and extensively researching pricing trends, Mulder said. He expects to see some significant relief in the construction materials supply chain by the middle or end of 2022.

“There is not anyone that has the experience to really deal with these long lead time items — this is brand new to the market,” said Dan Bailey, vice president of industrial at Rockford Construction Co. “We’re advising all of our clients to plan early. There is limited space in this market — plan early and don’t have a short term goal for construction projects.”

On top of supply chain challenges, employers across a wide range of sectors are struggling to find enough workers to stay fully staffed.

Mulder said Wolverine Building Group had two cases last year in which preliminary plans for an industrial development were abandoned because the clients didn’t have enough staff to support an expansion.

“In one case, there was demand in their business to support a 350,000-square-foot building, but they knew they wouldn’t be able to find the necessary workers to staff the operations, so they chose not to move forward,” Mulder said.

As The Right Place assists larger companies with expansions or relocations to the area, officials at the economic development organization have been doing more upfront research so companies are confident in the area’s availability of workers, Case said.

“Companies are confused on what exactly they should do and are afraid to raise wages because once you do that, you can’t go back, so they’re moving cautiously,” Case said. “Many are uncertain about if this will pass over, but I don’t think it’s going to because there has been a dynamic shift.”