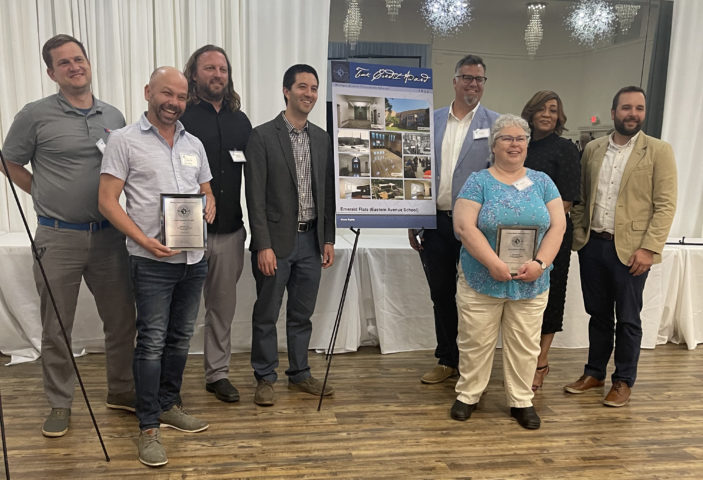 The 63,000 sq. ft., four-story building, originally built in 1929 as an innovative, integrated, accessible school building to allow young students to re-enter school after the polio epidemic. With wider hallways, doorways and ramps, Eastern Elementary was intended to teach students with disabilities alongside all neighborhood children. Now, in partnership with Oasis Community of West Michigan, some of the apartments have been designated for adults with disabilities.

“It was with great intention and ambition that this project was conceived,” offered Ryan VerWys, President and CEO of ICCF Community Homes. “We are thankful to receive this award to recognize our community’s commitment to preserving history, honoring diversity and creating equity for all.”

Wolverine Building Group, who served as the General Contractor on the project, has won multiple preservation awards in its 83-year commercial construction history. “It’s important to save these buildings because they tell part of our history,” said Drew Sorenson, Project Manager for Wolverine. “This historic school spoke to how our community responded to the last epidemic, and as we worked to preserve the structure and transform it into something new during the Covid-19 pandemic, community collaboration remained a priority.”

The Michigan Historic Preservation Council Award for Tax Credit Project is given to the outstanding building preservation project using federal and/or state tax credit programs. This project was unique in its use of tax credit programs, deploying state, federal, city and private partners to achieve its goals. When ICCF Community Homes purchased the building in 2015, they knew that the traditional 9% Low Income Housing Tax Credits were not going to work for the site and the size of the project. Instead, they worked closely with MSHDA, MEDC, and the City of Grand Rapids to find funding solutions that could make Emerald Flats a place for “work force” or “missing middle” housing. These partners combined the following financing tools to restore building while also creating homes for those in need: 4% Low Income Tax Credit equity, Historic Tax Credit equity, MSHDA Tax Exempt Bond financing, MSHDA HOME Funds, MSHDA MRF Gap Financing, MEDC Community Revitalization Program Funds, City of Grand Rapids CDBG funding, City of Grand Rapids Local Brownfield Revolving Fund, and seller/sponsor financing. These 9 sources of funding helped to make a nearly $15 million project a reality.

Founded in 1981, the Michigan Historic Preservation Network is the largest membership organization in the state dedicated to recognizing and preserving Michigan’s rich cultural and architectural heritage.